A pioneering research study which aims to make operating theatres safer places during the Covid-19 pandemic and beyond is underway at University Hospitals of Derby and Burton NHS Foundation Trust (UHDB).

UHDB is working in partnership with Rolls-Royce and Lancaster University to understand the spread of droplets in the air, generated when conducting Aerosol Generating Procedures (AGPs).

AGPs are procedures that produce droplets of liquid in the air which could contain pathogens, such as Covid-19. During the pandemic, surgeons have had to perform tracheostomies on Coronavirus patients. It is hoped the research can discover how far particles travel and how long they remain in the air in a bid to help improve safety for staff in operating theatres. 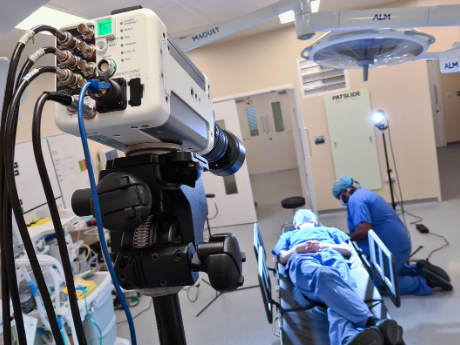 Mr Bindy Sahota, Consultant Head and Neck Surgeon at UHDB, is leading the research: “We want to make it safer for the staff who perform these procedures and who have spent so much time with the patients already.

“Many of the patients for this trial are having so much difficulty with breathing that they transferred to our Intensive Care Unit and after a while, it then became necessary to perform a tracheostomy to aid the patient with their breathing and this is particularly common in Covid-19 patients.”

Professor Owen Judd, Consultant Ear, Nose and Throat Surgeon at UHDB and co-lead for the study, hopes that the findings from the study go on to provide benefits beyond the pandemic:

“During the pandemic, we have had to adapt and change our methods to reduce infection rates with a number of procedures if they’re shown to generate aerosol droplets. Eventually, this will be looking at all AGPs to see which procedures produce more droplets than others so that we can continue to make these procedures safer for our staff.”

The cameras, which are ordinarily used by Rolls-Royce to conduct high-speed tests on jet engines, capture 8,000 frames per second, which allows analysts to create a more three-dimensional understanding of how far the droplets travel. 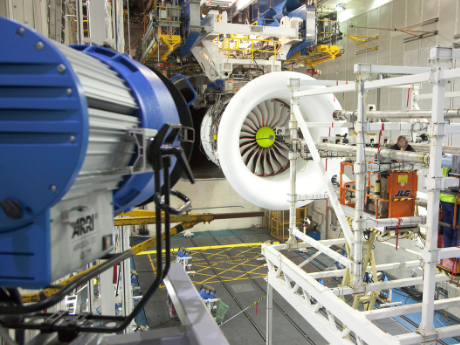 Miss Evelyn George, Impact Engineer at Rolls-Royce, operates the cameras and says using them in this way has been unique for her and her team:

“At Rolls-Royce, we test our engines and components to the limit, using high-speed cameras to capture incredible levels of detail. Working with patients instead of jet engines was very different to our day job, but it’s great that we’ve been able to apply our technology to help keep NHS staff safer while treating patients.”

Once a procedure has been recorded, the data are sent off to Lancaster University for further analysis. Dr Emma Stubington, Senior Research Associate at Lancaster University, analyses all of the images and converts the droplet spread into numbers to look for changes:

“When you look at the images before I've started to work on them, you can't see anything as the droplets are so small and far too minute to see with the naked eye.

“The movement of droplets can be identified by looking at the changes in light intensity between each photograph. We’re looking for such tiny changes and there’s lots of movement in surgery so it makes things quite difficult.”

The trial will run for around a year before conclusions are drawn and improvements made to the way in which operating theatres work. Mr Thomas Stubington, Ear, Nose and Throat Registrar at UHDB, said the team are working hard to improve measures: “We aim to record enough procedures to be able to give us an insight into the droplet production and hopefully suggest which methods of performing the procedure are safest.

“This will need at least 15 – 20 recordings, but because we often don’t know the procedures are necessary until a day or so before, getting this many recordings is likely to take a number of months.”

Despite the study being in its infancy, there are already positive signs. Professor Judd said: “Preliminary results have already suggested that our adapted surgical technique for performing tracheostomies has reduced the aerosol generated in the standard technique.”

Dr Magnus Harrison, Executive Medical Director, said: “It is fantastic to see UHDB involved in such pioneering research projects that are aiming to make a difference during the pandemic. We are involved in a series of Covid-19 research trials and have members of Team UHDB issuing innovative research studies relating to the virus, so this is a further testament to the strength of our research teams.”

1 and 2: The high-speed cameras being used to capture the droplets in operating theatres at Royal Derby Hospital

3: The high-speed cameras being used at Rolls-Royce when testing jet engines