A member of #TeamUHDB has created a stunning new mural has for colleagues and patients alike to enjoy at Sir Robert Peel Community Hospital.

Jenny Lea, Clerical Records Officer in the Health Records Department, has painted a bright and beautiful nature-inspired mural on the entrance to Andrew Ward at the Tamworth community hospital – much to the delight of the ward staff.

The art, which Jenny gave up her weekends and evenings to complete, features a striking tree with rainbow-coloured leaves, rabbits, bees and butterflies alongside a series of clinical workers. 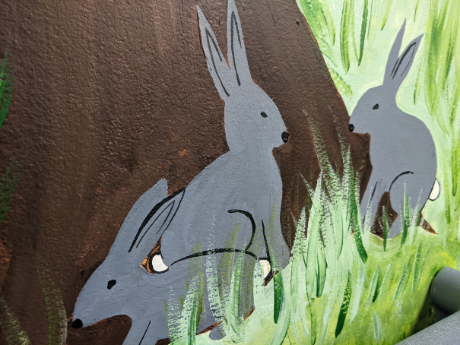 Jenny, who has also been a keen artist since her childhood, said the aim of the work was to create a more welcoming space for colleagues, patients and visitors: “I find art quite cathartic, and my dad and grandma were very artistic, so it’s always been a part of my life.

“Hospitals can often look very clinical and we just wanted to create something that added some brightness to the area.

“This project was Hollie’s idea but when she approached me, I was really excited. She wanted something really bright and welcoming at the entrance to the ward and to include something along the lines of the rainbow colours which have become so synonymous with the NHS in the past few years.

“I’ve absolutely loved it and I’m so proud of how it’s turned out.”

Hollie Shields, Senior Sister on Andrew Ward which cares for patients with complex discharge needs, had the original idea and reached out to colleagues at Sir Robert Peel to see if anyone could help. 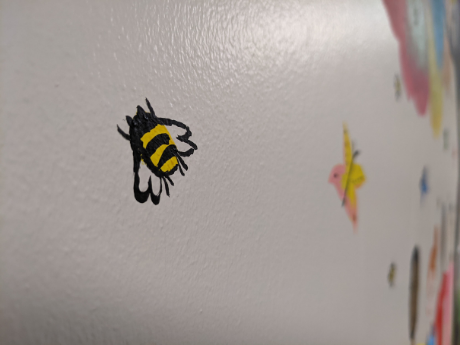 She said: “I had never met Jenny before we started working on this project, and it has really brought us together.

“The way that Jenny has this from a plan to reality is just amazing. It has brought the area to life and it’s absolutely great.”

The new art has received widespread praise from both staff and patients alike, with Hollie adding that it has made a huge difference to the ward team.

Hollie explained: “It has provided us with the lift that we all needed after what has been a really hard 18 months. The art work provides a more welcoming environment to the ward as this is the first thing all patients, staff and relatives see when they arrive on the ward.

“On behalf of everyone on Andrew Ward, I just want to say a huge thank you to Jenny as what she has done has completely transformed the area.”