Derby North MP Amanda Solloway has commended the “inspirational” Paul Brooks for his invention, the ‘Derby Door’, and services to the NHS which saw him receive an MBE.

Paul was awarded an MBE in The Queen’s New Year Honours List in 2020 for leading the intergenerational care programme, the development of volunteers and support of sustainability exploration, through to revamping sites at speed, increasing critical care capacity, during the Covid-19 pandemic.

Amanda met with Paul Brooks, Director of Patient Experience, Estates and Facilities at UHDB, alongside Lead Nurse for Infection Prevention and Control, Helen Forrest, to find out more about Paul’s invention, the ‘Derby Door’, which has been pivotal in helping to reduce the spread of infection in our hospitals during the pandemic.

Discussing how he came up with the idea of the ‘Derby Door’ 10 years ago, Paul said:

“I was blowing up an air bed for my niece and I was trying to get it through a door at home and it got stuck. It was then that I had a light bulb moment and thought I could be on to something. A company called Airquee in Bristol helped me to make the first one and when we got it here and tried it, it worked and fit perfectly first time!”

The ‘Derby Door’ is an inflatable ‘door’ which is used to help segregate ward areas for deep cleaning, but also to contain the outbreak of infections, initially C. difficile. However, as the pandemic struck, the ‘Derby Door’ became an invaluable tool in managing cross-contamination of Covid-19 in our hospitals.

The door is inflated in doorways and corridors and fits neatly into the required space, and has rubber seals around its edge to form a water and air tight seal. 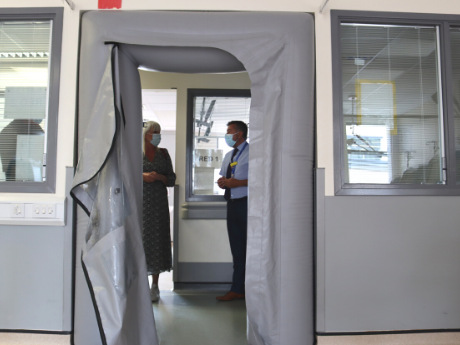 Paul continued: “Here, they’ve been used in wards, intensive care, the special care baby unit and we use them when building works are taking place too to prevent dust and dirt getting into clinical areas. We’ve had them for about a decade now and they’re always in use.

“During the pandemic we’ve used them a lot, too. We ordered some new ones in different sizes, and these are in different colours so we know which to use in certain locations.”

What’s more, the manufacture of the ‘Derby Door’ helps to support a small business in Transylvania which makes the materials used for the doors, and profits from all sales made are reinvested back into the NHS as per Paul’s request.

Paul joined the NHS as an Apprentice Plumber when he was 16 and now has more than 35 years’ experience of working in the NHS in Derby, during which time he has played an influential role. It was for all of his achievements that he was awarded his MBE.

Upon receiving the news, Paul said: “The most excruciating time for me was in the week following the announcement as it was just very overwhelming! I recently had a scroll delivered commending me for my MBE which was signed by HRH Prince Phillip, so that was an incredibly humbling moment.”

Amanda Solloway MP said: “It was an absolute delight to meet Paul who exemplifies everything our NHS heroes represent, and his dedication knows no bounds. His MBE couldn't be more deserved and his impact on the local trust is immeasurable.

“The people of Derby have long been recognised as innovative and Paul is another wonderful example of that pioneering spirit. The ‘Derby Door’ is an incredibly simple concept, but it has undoubtedly saved lives for a number of years, particularly during the pandemic.

“The last 18 months have been extremely difficult for everyone working in the NHS, and the staff at our hospitals have been unwavering in their dedication to our communities.

“Paul undoubtedly typifies this dedication and has played a vital role in making our hospitals safe during the pandemic. I’m so pleased that his commitment and hard work, across several decades, has been recognised with this honour.”