‘I remember getting my first pay cheque – I thought it was a bonus, getting paid to do something that I loved doing’ | Latest news

A beloved UHDB nurse who has dedicated herself to caring for thousands of people for nearly half a century has spoken of her pride at being able to do a job that she’s “always loved” for so long.

Known as a mentor, their work mum, or simply “Mrs B” to many of her colleagues, Gurjit Badhesha, was this week presented with her Long Service Award to celebrate both her 45th year in the NHS – and with us here at UHDB.

After starting her training as an enrolled nurse at the former Derby City Hospital back in 1976, Gurjit soon started working as a nurse in the old Receiving Room, which would go on to become the hospital’s Medical Assessment Unit (MAU) in 1997.

Gurjit has stayed on the Royal Derby Hospital unit ever since and has helped to grow MAU into what it is today – to UHDB’s huge benefit – although in her eyes, the nurse has never wanted to do anything else other than the profession she loves.

“I went to get my tonsils out when I was 12-years-old, and whilst I was watching the nurses at that time, I decided there and then that I wanted to be a nurse – that was it, that’s all I wanted to do,” said Gurjit.

“There weren’t that many Asian nurses around at that time, I think I was only one of a handful, and my dad’s sister said that I should look to do something else, but I’d already got it in my head that I wanted to be a nurse when I was a child, so that’s what I did.

“It’s just a job that I’ve always loved, and the years have just flown by. I remember getting my first pay cheque – I thought it was a bonus, getting paid for something that I loved doing. It was a hundred pounds cheque for a month, and I thought – wow, I can’t believe I’m getting paid to do this!”

In the years that have passed since, Gurjit has gone on to make an immeasurable difference, both to her patients and to the many UHDB colleagues she’s helped inspire, including MAU senior sister Amy Frost.

Amy said: “I first met Gurjit in 2003 after I’d completed my nursing training, and she was always very calm, always knew what she was doing, and the patient always came first, which is exactly what she’s still like now. When I came onto MAU, Gurjit was my mentor, as I know she was for Sam Bagshaw, our A&E matron in Derby, as well. We all talk about her like she’s our work mum, Mrs B, but she’s always the one driving standards and wanting to do the right thing for the patient. I’m hugely proud of her and we love having her here.”

Gurjit added: “I just loved working at the City Hospital and have got to know everyone here – it’s like a little family. It’s just a nice place to work, so I never wanted to leave, and I think that working through the pandemic has brought us all closer together too. I’m so proud of all the girls, who I’ve watched grow up and become who they are today – all of them in senior positions. People have asked me why I’ve never gone on to be a manager myself, but I’ve never wanted to do that, I’ve just always wanted to be a nurse!”

UHDB’s Chief Operating Officer, Sharon Martin – a former nurse herself who fondly remembers Gurjit helping to open MAU 24 years ago – surprised Gurjit with her Long Service Award on Wednesday morning, in front of her delighted colleagues.

“It was a complete surprise,” admitted Gurjit, “But it was a lovely surprise, as a I knew Sharon from back when she was a student herself. I was busy doing my orders, minding my own business and then the shock when Sharon showed up to present my award – oh my god!

“I just can’t believe it’s been 45 years, as that’s my whole life really. I’ve had people come up to me and say ‘wow, 45 years? I’ve not been alive as long as that’ – thank you very much! I still remember walking in on that first day. Oh, how things have changed since then! But no, when I told my family about this award, my son said that I should be proud, as not many people do 45 years in one place, so yes, I’m very proud.” 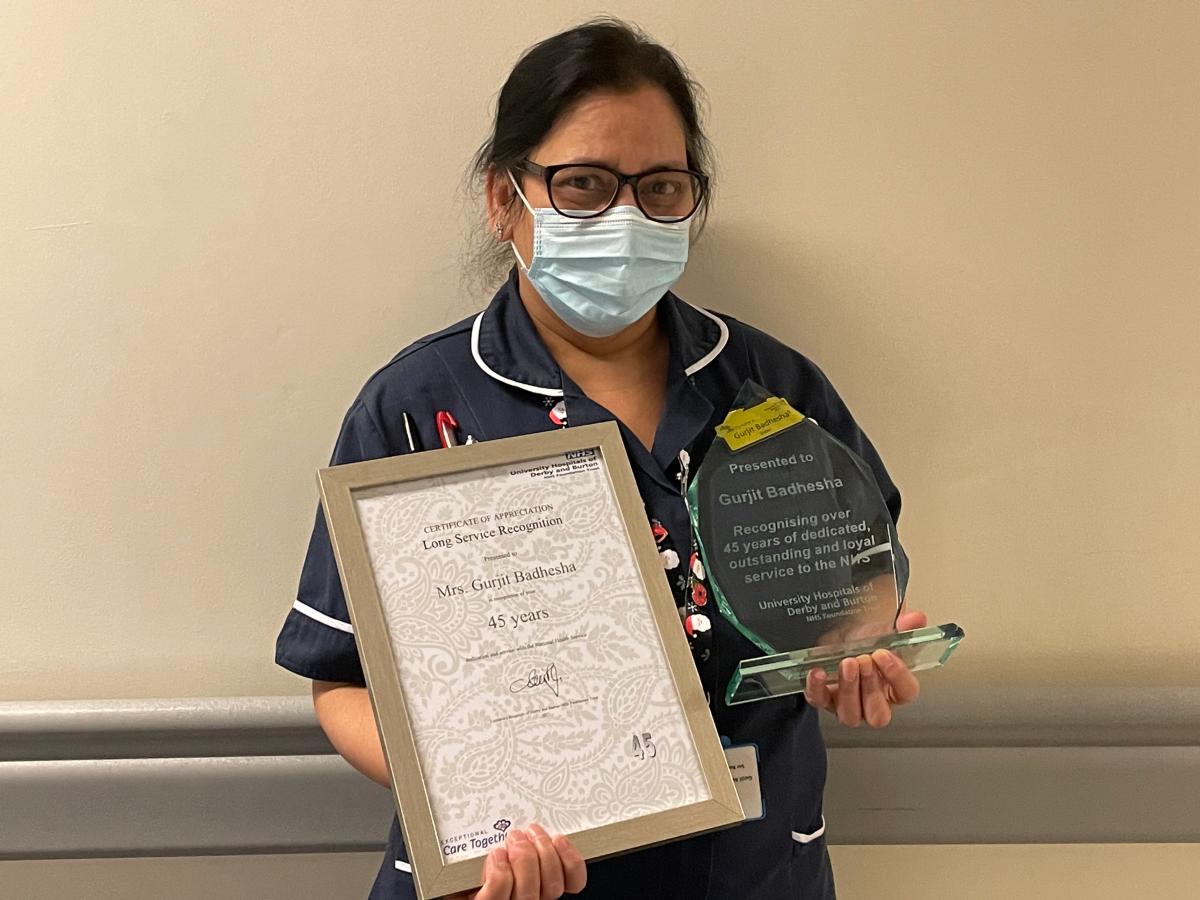 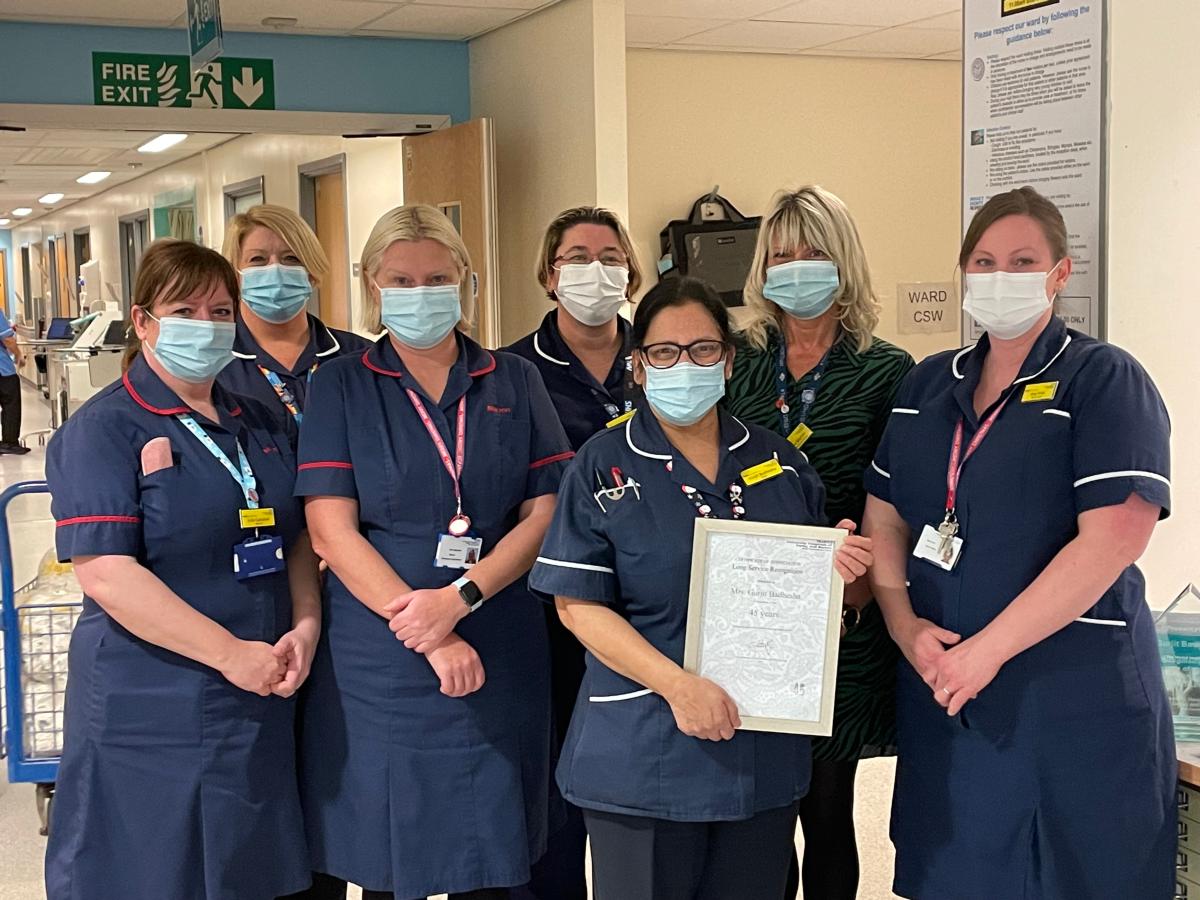