A hyperbaric diving bell used by deep sea divers carrying out work on the ocean floor has been installed at Royal Derby Hospital, as researchers investigate how to carry out more effective CPR in confined spaces.

The study team is led by Dr Graham Johnson, Emergency Medicine Consultant at UHDB, in collaboration with International SOS. They are analysing the current methods of resuscitation which are used in small spaces, especially inside diving bells, to find ways to make these more effective.These methods are being tested on a manikin in full diving gear inside the bell. 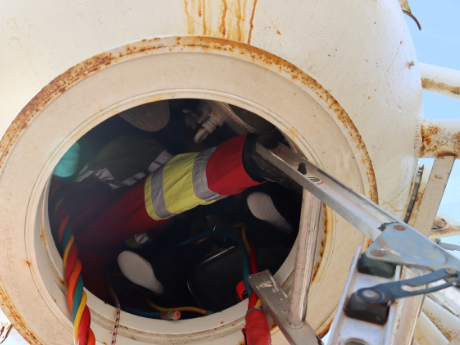 Diving bells are sealed, highly pressured vessels used to lower divers to extreme depths in places like the North Sea to allow them to perform work underwater.

Dr Johnson said: “This diving bell is a metal container just big enough for three people to sit inside. Divers can often spend up to eight hours inside these bells carrying out works under the sea.

“My father used to be a deep-sea diver, so this is a piece of work that’s quite close to home really.”

The average age of deep sea divers is on the rise, and with this comes increased risk of suffering a cardiac arrest, which is one of the reasons the team were prompted to begin this research.

Space inside the bell is also very limited due to its small size and the amount of equipment divers need to take to the ocean floor with them. This makes conducting CPR a difficult task, but it’s something this study aims to improve.

Dr Johnson explained: “There is an increasing prevalence of cardiac arrest in the diving community, which has an increasing average age, so we’re going to be looking into more effective ways for CPR to be delivered in this small space.

“Should a diver experience cardiac arrest while the bell is at the bottom of the ocean, it can take up to 45 minutes for the bell to be hoisted back to the surface, so developing these improved guidelines is really important.”

The team have so far tested a variety of methods, including the currently recommended methods of administering chest compressions with the knee and head, as well as testing a new piece of equipment which uses compressed gas to administer chest compressions – and the early results have been positive. 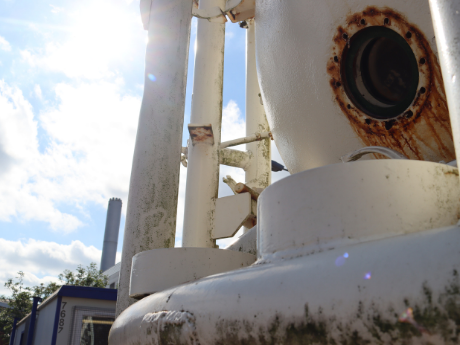 “A company called NUI based in Norway developed a machine which delivers chest compressions using compressed gas, saving valuable space inside the bell, but is also proving to be far more effective than delivering compressions manually as you would in any normal circumstance. We’re hopeful that this can lead to some real improvements.

“I’d like to thank all of the companies who have kindly offered their support to this project, including Go Dive in Derby. Your help is much appreciated.”

The bell will remain in place next to Ward 102 at Royal Derby Hospital for the foreseeable future after being hoisted into place by local firm Langley Mechanical Services.