Mandeep, the latest UHDB Florence Nightingale Alumni Nurse, has been a Sister at UHDB for four months, less than three years after becoming a qualified nurse. She shares her journey into healthcare and her experience as a mature student. 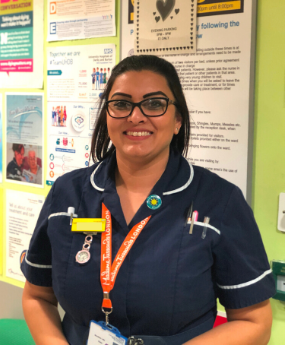 How did you become a nurse?

I’ve been in and out of healthcare since I was 18. I became a Healthcare Assistant (HCA) when I first left school, I’ve worked in the community, in residential and nursing homes and at what used to be the old DRI, so it was a while ago!

I left to study law, but after qualifying and starting to work in law, I found it just wasn’t for me, I really missed the contact I had with patients and helping people.

So I joined the bank as a HCA and seeing how happy I was doing a job I love, my husband encouraged me to look into applying for nursing. He’s such a vital part of my life and career - when I first married him 19 years ago, he said, “you need to be doing nursing, I see you as a nurse!” I was focused on pursuing law, but two kids later, he was right and I looked into studying to become a nurse.

As a late applicant in 2013, when I submitted my application, little did I know three weeks later I would be sat at University of Wolverhampton’s Burton campus, on my first day as a student nurse.

Why did you choose to work at UHDB?

The majority of my training was at Queen’s Hospital Burton, but I was also still a HCA on the bank at Royal Derby.

As a BAME female, I felt supported and saw that there were opportunities out there, at all levels. That is why I chose to work at UHDB - because the Trust is inclusive.

When I qualified in January 2017, I got a job at Royal Derby and got rotation on surgery. This was a brilliant opportunity for me to get experience on different wards before deciding where I wanted to work.  I ended up staying on the Urology ward, because I was learning so much there and picking up a lot of new skills in a busy surgical department.

How did you get involved in the Florence Nightingale Foundation (FNF)?

I applied to be a nurse on Ward 315, which is a short stay ward. I wanted to broaden my knowledge in medicine, coming from a surgical background. I didn’t know it would be the start of my leadership journey.

I was given opportunities to take charge, manage and lead. I gained hands on experience with the nursing team and patients including admissions, discharges and liaising with other teams in the hospital. My ward manager was incredibly supportive of my development and she suggested I apply for the NHS 70 Midlands and East Leadership programme that Florence Nightingale Foundation was offering, which later helped build my confidence and develop my leadership skills.

It was the first programme of its kind running in the Midlands and East of England. There were only 30 places overall, so I felt quite lucky to be accepted. I was the only person from UHDB and I attended the programme with a mixture of nurses and midwives from different trusts.

What did you learn on the programme and how has it helped you develop?

I met some quite influential people on the programme – we had guest speakers including a Director of Nursing and people working in leadership roles in the NHS and Health Education England (HEE). They had often developed into leaders after starting as HCA’s or nurses and were from various backgrounds. Being a mature student, going into nursing in my late thirties, with two kids was quite daunting, but hearing other people’s stories was very inspiring and empowering. It made me become more self-aware and be confident to speak out to influence change in patient care.

When I went back to the ward after the programme, I had the opportunity to implement a Quality Improvement Project relating on nurse-to-nurse handovers, which I was very passionate about. With the ward Sisters support, I had all the staff on board and was able to utilise the skills I gained from FNF to lead, manage and implement a change to improve patient care and experience.

How did you become a Sister?

During my appraisal, my manager and I spoke about my achievements so far and how I had developed that year, she thought I was ready for the next step in my career.  An opportunity came up for a Sisters role on a new ward which she supported my application for. Even to this day she continues to be a role model and mentor to me.

How has being a Florence Nightingale Alumni Nurse helped you in your role as a Sister?

The FNF wants to help to support future nurse and midwife leaders. They value and honour the legacy of Florence Nightingale, encouraging nurses and midwives to who bring positive change and have a voice to know how to drive that change forward.

As a new Sister, I now have the opportunity to share what I have learnt and show how I am developing into a nurse leader. I’m lucky to be part of a great team of Sisters on my ward who support each other, which is so important in a team. Under the guidance and invaluable support provided from my new Senior Sister and ward manager, I feel I am settling in confidently to the role of a Sister.

The course has taught me to always be yourself and always be authentic. I always advise others to bring their ideas and personality to their role, because that’s what will make them stand out from the rest. I love inspiring others the way I have been.

If you are thinking about progressing and taking the next step, then this is a great programme and you should absolutely apply for it.