If you think you may have symptoms of Coronavirus, follow the national guidance and self-isolate for seven days. We have Introduced a number of measures and changes to help delay the spread of the virus and maintain essential health services for those that will continue to need them during these unprecedented times. If you, or a member of your family has tested positive for Coronavirus, please find resources to aid your/their recovery on our Coronavirus - Supporting your recovery page.

A Queen’s Hospital Burton nurse and her family have met the Prime Minister after a video showing her teenage daughter’s reaction to some life-changing news about her condition went viral.

More than 400,000 people have now viewed the heartwarming clip of Beth Finn telling 13-year-old Isabelle Bibb, who has cystic fibrosis, that NHS England has agreed a deal to prescribe life-extending drug Orkambi.

Isabelle’s pure happiness at receiving the news is clear for all to see in the beautiful one-minute video, as she cries tears of joy and tells an also emotional Beth, who is recording the video: “That’s so good. I’m so happy.”

Among those to watch the moving clip was Health Secretary Matt Hancock, who invited Beth, who is Senior Sister at Queen’s Hospital Burton’s A&E, Isabelle and their family to visit 10 Downing Street to meet him and Prime Minister Boris Johnson.

Beth said: “I’ve been completely overwhelmed by the response to the video and the support of people, both at work and within the cystic fibrosis community. I never expected the video to go viral, so it was very surreal when we were contacted to say that the Prime Minister would like to meet us – it was like being in Love Actually!

“Isabelle had the best day having a look round the Houses of Parliament and Number 10 and it was fantastic to meet the Prime Minister and Matt Hancock, who were very passionate and really seemed to care about what this drug will mean to Isabelle, which was lovely.” 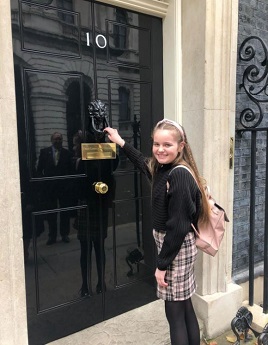 Isabelle was diagnosed with cystic fibrosis when she was 15 months old and currently takes around 30 tablets a day to manage her condition, which is life-limiting and has left her with just 61% lung function.

While there is no cure for cystic fibrosis, having Orkambi and drugs Symkevi and Kalydeco available on the NHS will have a hugely positive impact on the lives of those like Isabelle, by slowing the decline of lung function, which is the main cause of death in cystic fibrosis patients.

Beth added: “My reality is that my daughter could die before me, which is something that no parent should go through. To know that there’s medicine that could now change that, however, is everything to me. Isabelle knows that her condition is life-limiting, so for her to get this news has just been overwhelming – it’s a complete life-changer and I’ve been walking on cloud nine.

“Isabelle is the most incredible, articulate, brave and strong girl that you could ever wish to meet. She’s so special and has touched the hearts of so many people. Everyone in Burton A&E adores her because she has such courage and never lets anything hold her back. She’s my absolute world and my everything.”

The NHS has been granted access to the drugs for the next five years, with the medication working to slow down the damage caused by cystic fibrosis and improve the lung function of those with the condition.

Cystic fibrosis is an incurable disease that affects around 10,500 people in the UK and creates a mucus build-up that causes chronic lung infections and progressive lung damage.