UHDB and the University of Nottingham are delighted to announce recent honorary appointments and promotions to Professor of a series of colleagues.

Speaking about her appointment, Miss Tierney said that it was her father who initially encouraged her to apply for the position:

“My dad heard something on the radio about professors and said to me ‘why can’t you do that?’, so from there, I filled in an application with support from my colleague, Prof. Maarten Taal, and was thrilled and honoured to have been chosen for the role of Honorary Professor. However, I will say that it’s not about the title, it’s all about what you do with it that counts.

“I’m heading into the role with three key aims: to continue to raise the profile of colorectal surgery and the amazing work of my surgical colleagues both in the NHS and the University, to bring more to the table in my role as Head of School of Surgery in the East Midlands and to continue to put every effort into teaching undergraduates.

“Teaching has always been my passion and want to widen the visibility and accessibility of careers for females in surgery and maintain those teaching links I’ve built up over the past twenty years.”

Executive Medical Director and Deputy Chief Executive, Dr Magnus Harrison, was also appointed as an Honorary Fellow for his role in maintaining a strong relationship between UHDB and the University of Nottingham and ensuring medical students were properly supported during the pandemic.

Three of UHDB’s Clinical Academics, Mr Saad Amer, Dr Tim England and Dr Iskandar Idris will become Professors of the University of Nottingham as of 1 January 2022. 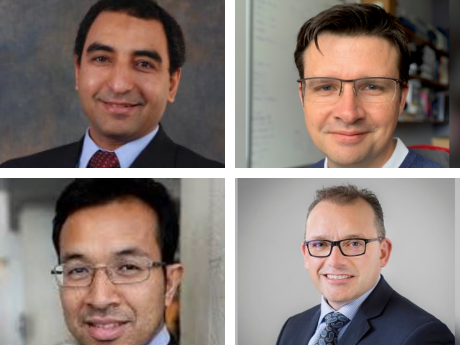 Professor Maarten Taal, Honorary Consultant Nephrologist at UHDB and Director of the Academic Unit for Translational Medical Science at University of Nottingham, praised all of his colleagues for their outstanding achievements.

He said: “I would like to congratulate all of my colleagues on their recent appointments. These titles are not given out readily, so it speaks volumes about the quality of their work and contributions to the Trust and the University to have so many appointments in a short space of time.

“The standard they have all had to meet to attain these posts really is very high, and it’s brilliant for the Trust to have so many clinicians in these positions, so congratulations to them all!”

Dr Magnus Harrison, Executive Medical Director and Deputy Chief Executive, said: “These appointments are a fantastic recognition of the amazing work of my colleagues and I want to congratulate them all on these wonderful achievements. Here at UHDB we have an excellent environment for encouraging growth and development of our people and these appointments further emphasise this.”