Women treated for ovarian cancer in Derby and Derbyshire have the best five-year survival rate in the East Midlands, according to a report.

This also makes NHS Derby and Derbyshire Clinical Commissioning Group the fifteenth highest ranked out of the 42 CCGs serving patients across the country.

A majority of women undergoing treatment for ovarian cancer in the area are treated at University Hospitals of Derby and Burton NHS Foundation Trust (UHDB) at the Derby Gynaecological Cancer Centre (DGCC).

Mr Andrew Phillips, Consultant Gynaecological Oncologist at UHDB, has praised the results and the work that has been done at the Trust in recent years to improve outcomes for our patients.

He said: “This is good news for the Trust and to have achieved these five year survival rates is a testament to the work that’s been done in recent years.

“It means that more women in Derbyshire with ovarian cancer have a better prognosis following their treatments.”

Mr Phillips explained the approach to treating ovarian cancer has changed in recent years, with different surgical methods adopted in a bid to improve the success of surgery and therefore survival rates going forwards.

He said: “At UHDB, we made a change around five years ago to switch to a more extensive form of surgery which is more successful at removing the cancer from the entire abdomen and is especially effective when combined with chemotherapy.

“This means that we can deliver a more complex form of treatment that many other Trusts cannot, which is a huge benefit to our patients.

“We are also not just focusing on the younger, fitter patients who are diagnosed, we’ve been working hard at developing our treatment of older patients who may have other health issues too. This is really important as most ovarian cancer cases are in women aged 60 and above.”

Dr Louise Merriman, Clinical Lead for Cancer for the CCG, said: “We welcome findings of this report, which indicates the focus and efforts being put into fighting cancer across our area, and the excellence and skills of clinicians in Derbyshire’s NHS trusts.

“We continue to work tirelessly and innovatively with our frontline partners to give everyone receiving a cancer diagnosis the best course of treatment for them, to support their quality of life and lead to recovery wherever possible.”

One patient who has benefitted from this new form of treatment is 51-year-old mother of two, Suzanne Wem, who underwent surgery for ovarian cancer in December 2017 after first noticing symptoms on a family holiday in August of the same year.

Mrs Wem, from Lichfield, said: “I felt chunky underneath my breast bone and when looking at myself in profile, it didn't look right. My appetite wasn't that good either but I just thought it was the heat.

“I couldn't manage a whole meal in the evening which wasn't like me at all. I went to the GP after the holiday, and the doctor said they could feel a pelvic mass, so I had some further tests and scans before being transferred to hospital.”

Mrs Wem first saw a consultant at Queen’s Hospital Burton and was then transferred to Royal Derby Hospital where she saw Mr Phillips for the first time and received her cancer diagnosis. 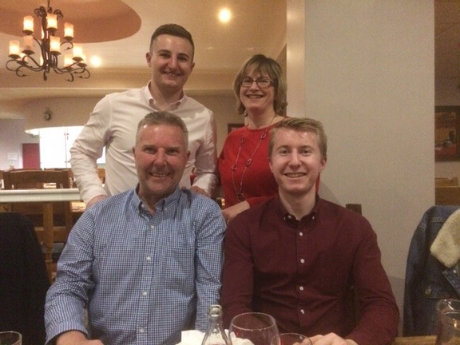 After further tests, Mrs Wem was diagnosed with stage three ovarian cancer and referred for comprehensive surgery, but she first had to have three rounds of chemotherapy following complications.

Mrs Wem added: “I’ve never really been in for treatment before, so I was terrified beforehand. When you get the clinical letters, it blows your mind about what the plan for your surgery is and the work that they do.

“But to wake up and be told that the procedure was a success and your recovery starts now was just amazing.”

According to statistics from Cancer Research UK, more than 7,000 women are diagnosed with ovarian cancer each year.

Mr Phillips explained that it is a difficult form of cancer to treat: “Ovarian cancer typically presents very late when the cancer has progressed and spread around the abdomen. This is because symptoms can be very subtle – such as persistent bloating, feeling full quickly or a loss of appetite, abdominal pain or changes in bowel habit.”

“We don’t want ladies to present with advanced ovarian cancer, so if you’re experiencing symptoms, please contact your GP and get checked.”

Mrs Wem was 49-years-old when she had her operation, which she appreciates was a benefit in the circumstances.

She said: “I was lucky really, they found the cancer fairly early on, I started running nine months before my surgery so was probably the fittest I’ve ever been and I was fairly young for an ovarian cancer patient – so things were on my side in that respect. I’m just so grateful for the people who offer this service.”

Mrs Wem went on to continue her recovery and was back at work at her GP practice in March 2018 and is extremely grateful to everyone involved in her care for helping her to get on her feet so quickly:

“I can’t comprehend how it is to work in that environment every day telling people they have cancer. I had great support from everyone at the Trust, my family and friends. I knew I could call members of the team at any time which was so reassuring.

“Kay Fleetwood, Gynaecology Oncology Clinical Nurse Specialist, and her team were all superb, as was everyone when I was in Intensive Care and the High Dependency Unit – absolutely everyone was amazing.”

Despite the encouraging figures for survival rates, Mr Phillips said the Trust is continuing to look for ways to improve on this to further improve outcomes for patients.

He said: “We are constantly striving to assess and improve the quality of our treatments and looking at how we can improve our surgery and our patients’ experience of this.”

Mrs Wem also had words of encouragement and reassurance for patients who may be facing the same situation she did three years ago: “Anyone who's about to go through this procedure should remember that any surgery is quite scary.

“The speed in which you are given your operation can be overwhelming from a personal perspective, but in terms of your treatment and outcomes, this is really good. I am so grateful to have had this procedure and that I had Royal Derby Hospital on my doorstep.”

Symptoms which can be associated with cancer can be found here.

Anyone who has symptoms which they suspect may indicate cancer should immediately contact their GP for further advice and checks.