A young woman who underwent emergency surgery at Royal Derby Hospital has thanked the surgeon who saved her life.

Jess Wilson from Derby, nominated Consultant Laparoscopic & Upper GI Surgeon, Mr Syed Iftikhar, after he performed emergency surgery on her in August 2020. Jess was in hospital with a bile leak which lead to Pneumonia and Sepsis – this required surgery immediately. Mr Iftikhar, who has worked at the Trust for over 25 years, was on a day off, but as soon as he heard Jess needed the surgery, he drove straight to the Royal Derby Hospital to assist.

After coming round from her operation, Jess thanked Mr Ifitikhar for everything he had done to make her better and coming in on his day off to operate on her. Mr Iftikhar responded, “I didn’t get into medicine for my days off, I got into medicine to make people better”

Kathy McLean, Chair at UHDB, presented Mr Iftikhar with a “Patient Hero Award” on behalf of his patient, Jess, in recognition of his life saving work. Kathy said: “It is a great honour to present you with this award. We both started at the Trust back in 1994, and I know that you have always put patients at the heart of everything you do. You clearly had a massive impact on Jess, who nominated you.

“It really is so special when a patient or relative goes out of their way to thank us for the work that we do. Well done.” 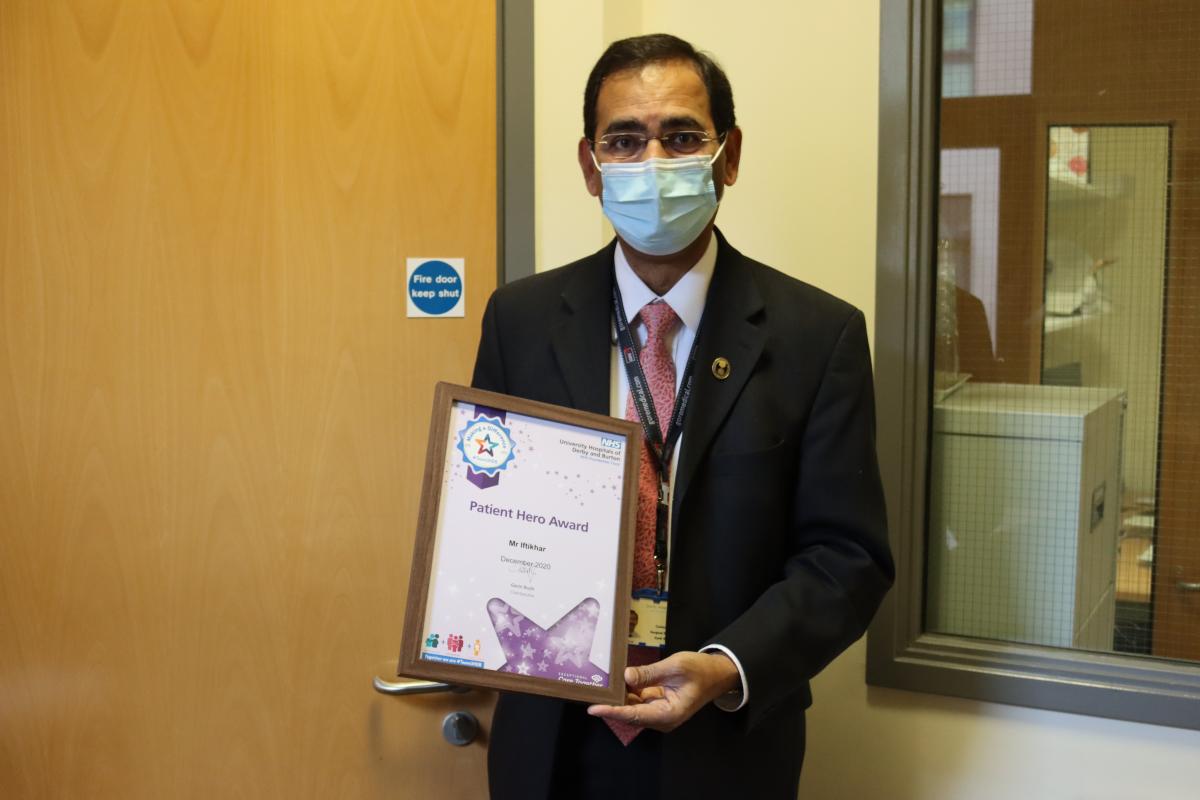 On receiving the award, Mr Iftikhar said: “I come from a very humble background and have always wanted to help people whenever I can. I have never gone for glory or recognition. To me, patient care is paramount and the appreciation I get from the patients for just doing my job encourages me to work harder and do more for our communities.”

We contacted Jess to let her know that her nomination had won Mr Iftikhar our Patient Hero Award. She said: “I am so happy he has won this award, it is very much deserved and hopefully puts a smile on his face during these challenging times”

Has a member of our staff gone above and beyond for you? Did they help save your life? Send us your story to uhdb.employeeawards@nhs.net using the subject “My Patient Hero”.